Statement from the Secretary of Defense 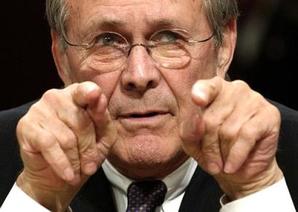 This one we didn't know we didn't know:
At least, I didn't. You, you might have known
You didn't know. Let's say that might be so.
You knew, with wisdom granted you alone,

You didn't know. You say, but don't say how,
You knew we didn't know about abuse
Or lack of it in their gaols we run now.
Well, now we all know. I make no excuse:

In fact it's far worse than you think. You thought
You knew how bad it was? If you could see
The photos in this classified report
You'd know you knew, as usual, less than me.

You want to see a stress position? Look
At how I crouch to meet the President
And tell him this has not gone by the book.
How do I know he won't know what I meant?

I feel for that man in his time of trial.
He simply didn't know, but now he knows
He didn't, and it hurts. Yet he can smile.
Remember how that Arab saying goes --
The blow that doesn't break you makes you strong?
They'll thank us when they get up off the mat.
They didn't know we knew what they knew. Wrong.
Even our women can do stuff like that.

Fair-weather friends who called our cause so good
Not even we could screw it, but now say
We've managed the impossible — I've stood
All I can stand of petty spite today,

So leave no room for doubt: now that we know
We might have known we didn't know, let's keep
Our heads. Give history time, and time will show
How flags wash clean, and eagles cease to weep.