Museum of the Unmoving Image 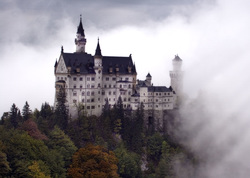 The objects on display might seem to lack
Significance, unless you know the words.
The final straw that broke the camel’s back,
The solitary stone that killed two birds.

Does this stuff really merit a glass case?
A tatty mattress and a shrivelled pea,
A shadow that somebody tried to chase,
A rusty pin that somehow earned a fee?

That gilded lily might have looked quite good
Without the dust that you won’t see me for.
But where’s the thrill in one piece of touched wood?
I think we’ve seen that uncut ice before.

A strained-at gnat, how interesting is that?
Gnats that were never strained at look the same.
Behold the pickled tongue got by the cat,
The ashes of the moth drawn to the flame.

Spilled milk, rough diamond, gift horse, gathered moss,
Dead duck, gone goose, bad apple, busted flush --
They’re all lined up as if we gave a toss.
Try not to kill each other in the crush.

They’ve got an annexe for the big events:
Burned boats and bridges, castles in the air,
Clouds for your head to be in, rows of tents
For being camp as. Do we have to care?

What does this junk add up to? Look and learn,
The headphones say. They say our language grew
Out of this bric-a-brac. Here we return
To when the world around us shone brand new,

Lending its lustre to what people said;
Their speech was vivid with specific things.
It cries out to be brought back from the dead.
See what it was, and hear what it still sings.