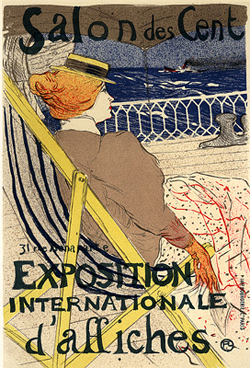 Another annual boat trip from Le Havre
To Bordeaux, but this time different. When Lautrec
Beheld the girl from Cabin 54
On deck reading, he decided to stay on
Until Lisbon at least. Painting had raised
The Paris cabarets, dance-halls and brothels
To angelic levels, but this unclouded creature
Started where all that finished. How not dream --
As she in her deckchair read and he nearby
Sketched for La Passagère du cinquante-quatre:
Promenade en yacht — that she would see his tears
And ask him to come with her to Dakar,
There to return his looks with the same favour,
Even for his legs? (Said Goebbels of his actress:
"She makes me forget my foot.") The painter's friend
Maurice Gilbert howled down the mad idea
Of Africa. They got off at Lisbon
And returned to Bordeaux overland by way
Of Madrid and Toledo, where, for the first time,
He saw El Greco. Dry-eyed, he took on
More strength, as if more strength were what he needed,
And not what he would instantly have traded
For just one glance from her untouched by pity:
Not even playful. Casual would have done.
The naked flame behind that cabin door!
Perish the thought. Paint her and finish her,
Drowned like the Holy Name in molten gold.