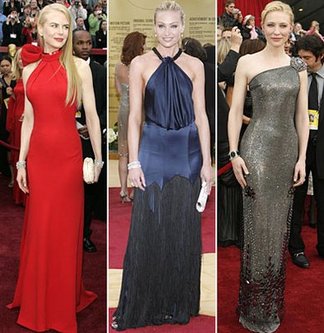 Here I am, complaining as usual to Nicole Kidman
("Sometimes I think that to you I'm just a sex object")
While I watch Elle McPherson model her new range
Of minimalist lingerie.
Elle does it the way I told her,
Dancing slowly to theme music from The Sirens
As she puts the stuff on instead of taking it off.
Meanwhile, Naomi Watts is fluffing up the spare bed
For her re-run of that scene in Mulholland Drive
Where she gets it on with the brunette with the weird name.
In keeping with the requirements of ethnic origin
Naomi's partner here will be Portia de Rossi,
Who seems admirably hot for the whole idea.
On every level surface there are perfumed candles
And wind chimes tinkle on the moonlit terrace:
Kylie and Dannii are doing a great job.
(They fight a lot, but when I warn them they might miss
Their turn, they come to heel.)
Do you know, I was scared I might never make it?
All suited up in my dynamite new waistcoat,
I was listening to our spiritual leader --
Radiant his beard, elegant his uplifted finger --
As he enthrallingly outlined, not for the first time,
The blessings that awaited us upon the successful completion
Of our mission to obliterate the infidel.
He should never have said he was sorry
He wasn't going with us.
Somehow I found myself pushing the button early.
I remember his look of surprise
In the flash of light before everything went sideways,
And I thought I might have incurred Allah's displeasure.
But Allah, the Greatest, truly as great as they say --
Great in his glory, glorious in his greatness, you name it --
Was actually waiting for me at the front door of this place
With a few words of his own. "You did the right thing.
Those were exactly the people to lower the boom on.
Did they really think that I, of all deities,
Was ever going to be saddled with all that shit?
I mean, please. Hello? Have we met?"
And so I was escorted by the Hockeyroos --
Who had kindly decided to dress for beach volleyball --
Into the antechamber where Cate Blanchett was waiting
In a white bias-cut evening gown and bare feet.
High maintenance, or what?
No wonder I was feeling a bit wrecked.
"You look, "she said, "as if you could use a bath."
She ran it for me, whisking the foam with her fingertips
While adding petals of hydrangeas and nasturtiums.
Down at her end, she opened a packet of Jaffas
And dropped them in, like blood into a cloud.