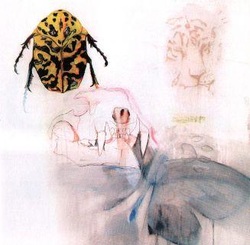 The gradual but inexorable magic
That turned the dinosaurs into the birds
Had no overt, only a hidden, logic.
To start the squadrons climbing from the herds
No wand was ever waved, but afterwards
Those who believed there must have been a wizard
Said the whole show looked too well-planned for hazard.

And so it does, in retrospect. Such clever
Transitions, intricate beyond belief!
The little lobsters, in their mating fever,
Assaulted from the sea, stormed up the cliff,
And swept inland as scorpions. But if
Some weapons freak equipped their tails for murder
He must have thought sheer anguish all in order.

Source of all good and hence of evil, pleasure
And hence of pain, he is, or else they are,
Without a moral sense that we can measure,
And thus without a mind. Better by far
To stand in awe of blind chance than to fear
A conscious mechanism of mutation
Bringing its fine intentions to fruition

Without a qualm about collateral horror.
The peacock and the tapeworm both make sense.
Nobody calls the ugly one an error.
But when a child is born to pain intense
Enough to drive its family all at once
To weep blood, an intelligent designer
Looks like a torture garden's beaming owner.

No, give it up. The world demands our wonder
Solely because no feeling brain conceived
The thumb that holds the bamboo for the panda.
Creation, if the thing's to be believed --
And only through belief can life be loved --
Must do without that helping hand from Heaven.
Forget it, lest it never be forgiven.