When We Were Kids 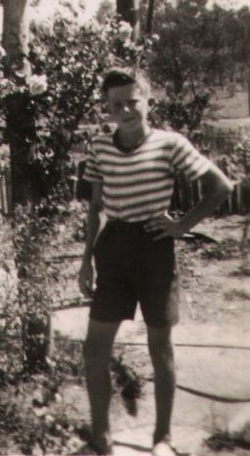 When we were kids we fought in the mock battle
With Ned Kelly cap guns and we opened the cold bottle
Of Shelley’s lemonade with a Scout belt buckle.
We cracked the passion fruit and sipped the honeysuckle.

When we were kids we lit the Thundercracker
Under the fruit tin and we sucked the all day sucker.
We opened the shoe box to watch the silk-worms spinning
Cocoons of cirrus with oriental cunning.

When we were kids we were sun-burned to a frazzle.
The beach was a griddle, you could hear us spit and sizzle.
We slept face down when our backs came out in blisters.
Teachers were famous for throwing blackboard dusters.

When we were kids we dive-bombed from the tower.
We floated in the inner tube, we bowled the rubber tyre.
From torn balloons we blew the cherry bubble.
Blowing up Frenchies could get you into trouble.

When we were kids we played at cock-a-lorum.
Gutter to gutter the boys ran harum-scarum.
The girls ran slower and their arms and legs looked funny.
You weren’t supposed to drink your school milk in the dunny.

When we were kids the licorice came in cables.
We traded Hubba-Hubba bubblegum for marbles.
A new connie-agate was a flower trapped in crystal
Worth just one go with a genuine air pistol.

When we were kids we threw the cigarette cards
Against the wall and we lined the Grenadier Guards
Up on the carpet and you couldn’t touch the trifle
Your Aunt Marge made to go in the church raffle.

When we were kids we hunted the cicada.
The pet cockatoo bit like a barracuda.
We were secret agents and fluent in pig Latin.
Gutsing on mulberries made our lips shine like black satin.

When we were kids we caught the Christmas beetle.
Its brittle wings were gold-green like the wattle.
Our mothers made bouquets from frangipani.
Hard to pronounce, a pink musk-stick cost a penny.

When we were kids we climbed peppercorns and willows.
We startled the stingrays when we waded in the shallows.
We mined the sand dunes in search of buried treasure,
And all this news pleased our parents beyond measure.

When we were kids the pus would wet the needle
When you dug out splinters and a piss was called a piddle.
The scabs on your knees would itch when they were ready
To be picked off your self-renewing body.

When we were kids a year would last forever.
Then we grew up and were told it was all over.
Now we are old and the memories returning
Are like the last stars that fade before the morning.