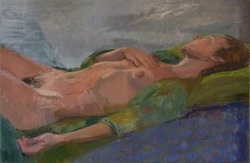 Planning to leave Calypso in the lurch,
Odysseus snuck off to build a ship.
He found the right-shaped boughs of larch or birch
Or spruce, for all I know, from which to strip
The bark, and...but the details we can skip.
I won't pretend that I've done much research.
He had to build a ship and he knew how.
Just how he did it hardly matters now:

Enough to say he juggled rib and spar.
Calypso came to him and said, "I see
That duty calls. Will you be going far?
You wouldn't have your mind on leaving me,
By any chance? Forget the trickery
For once, and if you're following your star
Just say so. Circe lured you with a song.
At least I wasn't stringing you along."

"It's time," he said. "I'm an adventurer.
I sail in search of things. It's what I do.
I'd heard about how beautiful you were,
So lovely that I came in search of you.
But now I know you and need something new
To challenge me." He wryly smiled at her
To show he knew he sounded like a ham.
"You wanted me. Well, this is what I am."

"All very well," Calypso said, "but I
Have an investment here. You had to quit
Sometime, and I gave you a reason why.
Old studs like you need youth to love. I'm it.
I'm always eager, and you're still quite fit:
A last adventure to light up the sky.
I'll tell my tale forever, don't forget:
The greatest lover that I ever met."

Odysseus could see the point, but still
He stood his ground, a man of destiny
Proclaiming his ungovernable will
To follow the unknown out to the sea
Beyond the sea, and solve the mystery
Of where the world went next, and not until
He had would he find rest. Calypso said,
"No wonder that you turned up here half dead."

That night the two of them made love again.
She slapped herself against him when she came
The way she always did, but even then
She let him know she knew things weren't the same.
She cried out his polysyllabic name --
Something she'd never done for other men --
As if, this time, he was no longer there.
But though she flattered him with her despair,

Already he had made the break. His mind
Was elsewhere, on a course she could not guess.
She thought her hero had new worlds to find
Out on the edge of the blue wilderness,
But he had lied, to cause her less distress.
We needn't think of him as being kind:
He simply knew the truth would drive her mad
And make her fight with everything she had.

After he left, she let the world believe
She'd given him the boat: a likely tale
That Homer swallowed whole. Keen to deceive
Even herself, for no nymph likes to fail --
The Miss World of the Early Age of Sail
Had never yet known such a cause to grieve --
She spread the story that he'd only gone
Because she told him legends must go on.

But he was going home. There, in the end,
Lay the departure point for his last quest.
Age was a wound that time indeed would mend
But only one way, with a long, long rest.
For that, familiar territory is best.
As for Penelope, he could depend
On her care for the time he had to live.
Calypso wanted more than he could give,

And it was time to take, time to accept
The quiet bounty of domestic peace.
After he killed the suitors who had kept
His wife glued to the loom, she spread the fleece
Of their first blanket and they found release
Together as they once had. Though she wept
For their lost years, she gave him her embrace,
And he looked down into her ageing face

And saw Calypso. What the nymph would be,
Given the gift of time, was there made plain,
Yet still more beautiful. Penelope,
Because she knew that we grow old in pain
And learn to laugh or else we go insane,
Had life unknown to immortality,
Which never gets the point. "Well, quite the boy,"
She murmured. "And now tell me about Troy."

Later the poets said he met his fate
In the Atlantic, or perhaps he went
Around the Horn and reached the Golden Gate.
Space vehicles named after him were sent
Into infinity. His testament,
However, and what truly made him great,
Was in the untold story of the day
He died, and, more or less, had this to say:

"Penelope, in case you ever hear
The nymph Calypso loved me, it was so:
And she tried everything to keep me near
But finally she had to let me go
Because she knew I loved you. Now you know,
And I can move on, having made that clear."
And so he did, while she knelt by his side,
Not knowing, as he sailed on the last tide,

That just this once he almost hadn't lied.