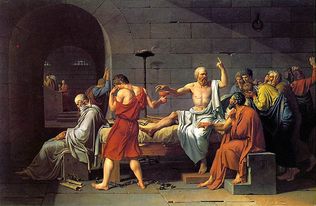 Delayed until the sacred ship got back
From Delos , the last hour of Socrates
Unfolded smoothly. His time-honoured knack
For putting everybody at their ease

Was still there even while the numbness spread
Up from his feet. All present in the cell
Were much moved by the way he kept his head
As he spoke less, but never less than well.

Poor Crito and Apollodorus wept
Like Xanthippe, but not one tear was his
From start to finish. Dignity was kept.
If that much isn't certain, nothing is.

I only wish I could have been there too.
When, later on, I wrote down every word,
I double-checked — the least that I could do --
To make it sound as if I'd overheard.

But let's face facts. He lives because of me.
That simple-seeming man and what he meant
To politics and to philosophy --
These things have not survived by accident.

​Deals to be done and details to discuss
Called me elsewhere. I'm sorry for that still.
He owed a cock to Aesculapius.
Socratic question: guess who paid the bill?
​
(Spectator, April 3, 2004)