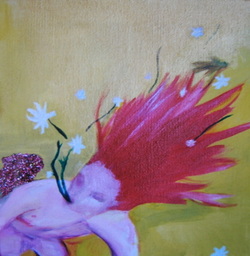 How many angels knew who Hamlet was
When they were summoned by Horatio?
They probably showed up only because
The roster said it was their turn to go.

Another day, another Dane. Too bad,
But while they sang their well-rehearsed lament
They noticed his good looks. Too soon, too sad,
This welcome home for what seemed heaven sent.

Imagine having been with him down there!
But here I dream, for angels do not yearn.
They take up their positions in the air
Free from the passions of the earth they spurn.

Even their singing is done less from joy
Than duty. But was this the usual thing?
Surely they gazed on that recumbent boy,
Clearly cut out one day to be a king,

And sang him to his early rest above
With soaring pride that they should form the choir
Whose voices echoed all the cries of love,
Which, even when divine, implies desire?

But soft: an ideal world does not exist.
Hamlet went nowhere after he was dead.
No angel sighed where lovers never kissed,
And there was nothing in what his friend said.

Hamlet himself knew just what to expect:
Steady reduction of his body mass
Until the day, his very coffin wrecked,
Some clown picked up his skull and said, “Alas”.

​No, there would be no music from on high.
No feather from a wing would fall, not one.
Forget it all, even the empty sky --
What’s gone is gone, sweet prince. What’s done is done.