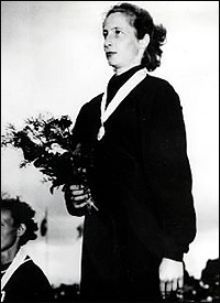 Famous for overcoming obstacles
She finally finds one she can't transcend.
Hit by the leading foot, a hurdle falls,
But this is a brick wall and spells the end.

Not that she hit too many. Most she cleared,
Her trailing leg laid effortlessly flat.
As in repose, at full tilt she appeared
Blessed with a supple grace. On top of that

She studied physics, took a good degree,
Had several languages to read and speak.
Alone, she wasn't short of company:
In company she shone. She was unique

Even among our girl Olympians
For bringing the mind's power and body's poise
To perfect balance. Ancient Greeks had plans
Along those lines, but strictly for the boys.

Her seven medals in three separate Games
Should have been eight, but she retired content.
In time she sold the lot to feed the flames
Of her concern for the Environment.

Civic responsibility: but one
Kind of pollution lay outside her scope
To counteract. The races she had run
Were won now by sad cyborgs fuelled with dope.

It started in the East. The State required
Results that only science could supply.
The female victims, suitably rewired
For victory, could do everything but fly.And if s

ome wept for how they changed, too bad.
The doctors did what they were ordered to
And told the chosen ones they should be glad:
Drink this, and it will make a man of you.

The plague spread to the West, where money talked.
Poor women, like poor men, had much to gain
Through muscle. The bad bottle was uncorked.
They plucked their chins and thought it worth the pain.

Perhaps it was, yet one glimpse of Flo-Jo
Coiled in her starting blocks told you the cost.
Transmuted to a charging buffalo,
She mourned with painted nails for what she'd lost.

But more was lost than that. The time had come
When no-one could be trusted any more
Because to play it straight seemed simply dumb,
And who remembered how things were before?

Desire beats scruple into second place.
Gratification makes a fool of thrift.
The only rules are Rafferty's. The race
Is to the sly that once was to the swift.

A brighter future, back there in the past,
Flared for a moment but it flickered out.
It speaks, our flag that flutters at half mast,
Of final silence. Let it silence doubt:

When Shirley raced, the wings on her spiked shoes
Were merely mythical, like Mercury's.
She did it unassisted, win or lose.
The world she did it in died by degrees

While she looked on. Now she is spared the sight
At last. The bobby-dazzler won't be back,
Who ran for love and jumped for sheer delight
In a better life and on a different track --

We have too much if she is what we lack.