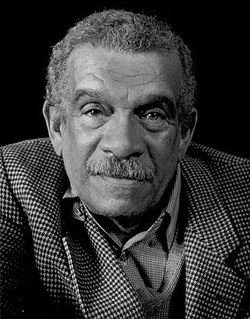 You made me think last night. Your lines about
How people on those islands you evoke
As easily as blowing smoke
Could not look down from high ground to the sea,
Or even see a cargo ship, without
Fear of the worst, reminded me --
Reminded me I still need the reminder --
That my own ships and oceans linked a kinder
Imperium. Though free for generations
The crime's descendants are not free of that --
The open water is for drowning in.
Embarked now for the erstwhile ruling nations,
The migrant's back still hears the spitting cat.
He looks up through the grille at the least grin
Of condescension. Railway station porters
With one impatient word rape teenage daughters --
Terror invades perception when it gives
That tinge of death to where your verse most lives,
In the lost luxuriance
Of how you, growing up, were made to feel
By history that your childhood was unreal
Because the actual so usurped romance
That even the sweet white of breaking waves --
Their stately bridal veils of spray --
Looked startling as the bones of broken slaves:
Unsleeping infrastructure of the trance
The tourist brochures lovingly display,
Taking your time out of their time away.

You made me think last night, but not today.
Today I found out that a girl I know
Was bailed up by two little boys in hoods
Who claimed their hidden knives were not for show.
She made a weapon of her front-door key.
They took off. No doubt short of worldly goods
Through no fault of their own, they make me long
To see them kicked and whipped. Don't get me wrong:
Where she lives, there are whites the same age worse.
But let's not kid ourselves. Race is a curse,
And at a time like this it curses me.
To put it bluntly, I don't think at all.
Terror invades perception:
Reaction, ruled by what we first recall,
Enrols an ethnic type without exception
Among the threats to life, as it must do
Even for you. Tell me that isn't so.
Hand on your heart and say it isn't true.

You made me think last night. How can I know
Your deepest wish is not for me to go
To Hell? Should I pretend I understand
What it feels like, before the burning sand
And scalding water teach me how to die
Day in, day out, under that pretty sky?
Before I, too, can hear in the surf's roar
The landlady's slammed door,
Can see the lynch mob strutting with the gulls
Gathered among the hulls
Of yachts whose owners don't just patronise
A raw colonial, but spurn my hand
And still would if it held the Nobel Prize --
Proof of my right to land
Having sailed so far, and, stranger yet, survived
A setting out from which so few arrived,
And fewer still thrived, on the further shore?
I know: I should have thought of this before.

​(The Liberal, February/March 2005)
Guardian Recital of this Poem