Return of the Lost City 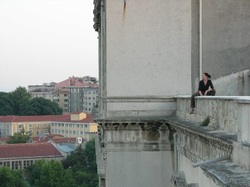 How far was Plato free of that "inflamed
Community" he said we should avoid?
Sofas, incense and hookers: these he named
Among the habits not to be enjoyed,
And if you did, you ought to be ashamed.
But can't we tell, by how he sounds annoyed,
That his Republic, planned on our behalf,
Was where his own desires had the last laugh,

If only as the motor for his sense
Of discipline? Even the dreams were policed,
By the Nocturnal Council. Such immense
Powers of repression! What would be released
Without them? The Republic was intense:
The fear of relaxation never ceased.
Hence the embargo on all works of art,
However strict in form, that touched the heart.

No poetry. No poets! No, not one --
Not even Homer, if he were to be
Reborn — could be admitted, lest the sun
Set on the hard-won social harmony,
And that obscene night-life which had begun
In man's first effort at society,
Atlantis, should come flooding back, the way
The sea did, or so story-tellers say.

But Plato knew that they'd say anything:
For money or applause or just a share
Of an hetaera, they would dance and sing
And turn the whole deal into a nightmare.
The very prospect left him quivering
With anger. There is something like despair
Haunting the author of the ideal state,
A taunting voice he heard while working late:

Atlantis made you. It is what you know,
Deep down. Atlantis and its pleasures drive
Your thoughts. Atlantis never lets you go.
Atlantis is where you are most alive --
Yes, even you, you that despise it so,
When all mankind would love it to arrive
Again, the living dream you try to kill
By making perfect. But you never will.