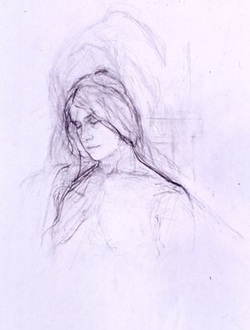 The idea is to set the mind adrift
And sleep comes. Mozart, exquisitely dressed,
Walks carefully to work between soft piles
Of fresh horse-dung. Nice work. Why was my gift –
It’s sixty years now and I’m still obsessed –
Hidden behind the tree? I cried for miles.
No-one could find it. Find the tiger’s face.
It’s in the tree: i.e. the strangest place.

But gifts were presents then. In fact, for short,
We called them pressies, which was just as long,
But sounded better. Mallarmé thought “night”
A stronger word than nuit. Nice word. The fort
Defied the tide but faded like a song
When the wave’s edge embraced it at last light.
Which song? Time, time, it is the strangest thing.
The Waves. The Sea, the Sea. Awake and Sing.

Wrong emphasis, for music leads to sex.
Your young man must be stroking you awake
Somewhere about now, in another time.
Strange thing. Range Rover. Ducks de Luxe. Lex rex.
The cherry blossoms fall into the lake.
The carp cruise undisturbed. Lemon and lime
And bitters is a drink for drinkers. Just.
I who was iron burn in silence. Rust.

What would you do to please me, were you here?
The tarte tatin is melting the ice cream.
One sip would murder sleep, but so does this.
Left to itself, the raft floats nowhere near
Oblivion, or even a real dream.
Strange word, nice question. Real? Real as a kiss,
Which never lasts, but proves we didn’t waste
The time we spent in longing for its taste.

Seek sleep and lose it. Fight it and it comes.
I knew that, but it’s too late now. The bird
Sings with its wings. The turtle storms ashore.
Pigs fly. Would that translate to talking drums?
Nice if they didn’t understand a word
Each other said, but drowned in metaphor –
As we do when we search within, and find
Mere traces of the peace we had in mind.

Forget about it. Just get up and write.
But when you try to catch that cavalcade,
Too much coherence muscles in. Nice thought.
Let’s hear it, heartbreak. Happiness writes white.
Be grateful for the bed of nails you made
And now must lie in, trading, as you ought,
Sleep for the pictures that will leave you keen
To draft a memo about what they mean.

You will grow weary doing so. Your eyes
Are fighting to stay open. When they fail
You barely make it back to where you lay.
What do you see? Little to memorize.
A lawn shines green again through melting hail.
Deep in its tree, a tiger turns away.
Nice try, but it was doomed, that strange request
To gaze into the furnace and find rest.
​
The Spectator, October 2006
(Drawing by Laura Smith)