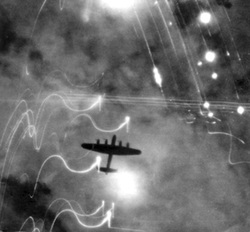 Over Hamburg in July 1943
The Lancaster crews could feel the heat
Through the sides of the aircraft.
The fire was six thousand feet high.
Further East, there were other fires.
When burning a lot of bodies, the SS found
The thing to do was to put down a layer
Of women first.
They had more fat in them.
In Tokyo, on the night of March 10th 1945,
Some people who survived in a canal
Saw a horse on fire running through the streets.
But few who saw it were left to remember anything:
Even the water burned.
In New York, on September 11th 2001,
Some couples, given the choice
Between the flames and a long fall,
Outflanked the heat and went down holding hands.
Come with me, you imagine the men saying,
I know a quicker way.
Sydney, two years later. Next to my mother’s coffin
I gave thanks that she would shortly meet
A different kind of fire,
Having died first, and in due time.
​
(Weekend Australian, September 23-24, 2006)