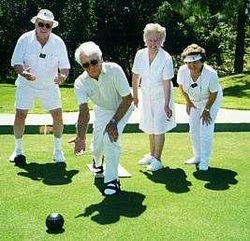 In the park in front of my place, every night
A bunch of tramps sleep on the wooden porch
Of the bowling green club-house. They shed no light.
No policeman ever wakes them with a torch,

Because no-one reports their nightly stay.
People like me who take an early walk
Just after dawn will see them start the day
By packing up. They barely even talk,

Loading their duffel bags. They leave no trace,
Thus proving some who sleep rough aren't so dumb.
Tramps blow their secret if they trash the place:
This lot make sure that, when the bowlers come,

There's not a beer-can to pollute the scene.
And so, by day, neat paragons of thrift
And duty bow down to the very green
Which forms, by night, for scruffs who merely drift,

Their front lawn. If the bowlers only knew,
For sure they'd put in for a higher fence.
They'd have a point, but it would spoil the view
More than the tramps will, if they have the sense

To keep on cleaning up before they go,
Protecting indolence with industry:
A touch of what the bowlers value so.
Which way of life is better? Don't ask me -